Circumcision: cutting off the tree of life?

Could the religious rite of circumcision symbolise the original cutting off of the tree of life?

One key definition of the term ‘Testament’ is a covenant, a binding promise, between God and man that is sealed in blood. Genesis tells us the  blood seal chosen by the god of the old testament (Jehovah) to be seminal to his pact with Abraham was circumcision.

I’m wondering why. If you need a drop of blood, why cut off a chap’s foreskin? Why not, say, simply prick a finger? 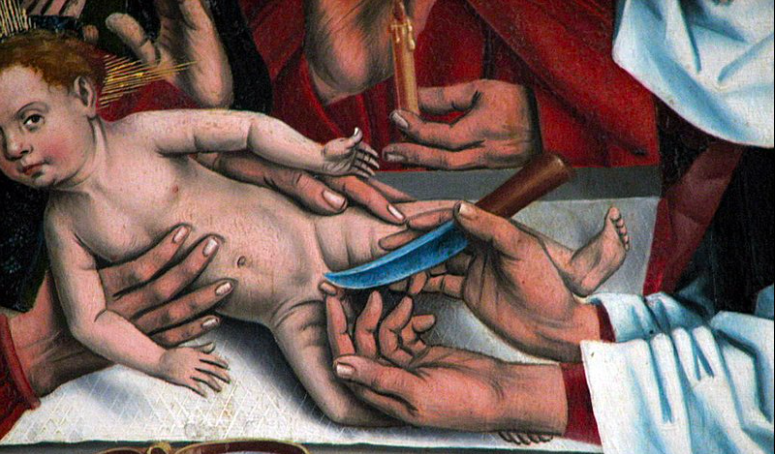 While I couldn’t find any pictures of the 99-year-old Abraham circumcising himself, I did find this well-imagined scenario by Friedrich Herlin of Christ’s circumcision! Seems Joseph and Mary managed to squeeze in this bris four days before the Epiphany.

Not only that, what Shakespeare clarifies as a key aspect of the Grail secret is that the blood of Jesus the Christ (aka the sangraal) did not just seal the new testament, it unsealed the old testament. With the Shedding of Jesus’ blood, Mosaic Law (and with it the covenant of circumcision) became null and void! This was the unbearable truth that has taken over 2000 years to begin to percolate into the new narrative.

Diving deeper into the true symbolism of circumcision, what if the penis itself actually symbolises the tree of life? The imagery starts to come clear when Macbeth, after he slaughters Duncan, describes his murder as if,  ‘The head, the source, the fountain of the royal blood is stopped.’  After all, it is through the penis that new life is made possible when received by the womb.

Indeed this very penile possibility could be foreshadowed in Genesis when ‘Adam and Eve’ covered their genitals to symbolise not only their shame but the recurring theme in Shakespeare that the serpent raped Eve and through her sired Cain and Abel, dubbed (in Othello) the monstrous birth? The resultant being the hu-man being: part God – part serpent.

The orthodox narrative for thousands of years has focused on the sinful nature of sexual union, and filled us with guilt and shame over the most precious parts of our body and one of the most fulfilling acts in life.  Why? Because of the psycho-spiritual delusions caused by (the grossly misunderstood interpretation of) the original sin.

The true original meaning of ‘sin’ is to cut off the awareness of God within ourselves. The ‘original sin’ did this for all mankind. For thousands of years none of us could hear the sound of God in our inner ears, nor feel the presence of God in our hearts. We could only feel the grief of existential abandonment, loneliness, and hopeless despair. Thus, contrary to Not only that, the Mosaic Law that purported to be the written commandments of God made it impossible