In harsh contrast to the satirical farce of Twelfth Night’s Epiphany, the subtext of Titus is surely the most vicious, mocking blasphemy in the Canon. But why? 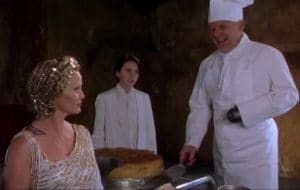 The serving of the body and blood of Chiron and Demetrius, ground to a paste and baked in a pie, ( by Titus wearing the high chef’s hat) is a scrumptious pastiche of the most sacred of Christian rituals.

To appreciate the glorious goriness in its fullness, one must look through the same lens through which Shakespeare seems to see the scriptures and formulate his heretical theology: i.e. the Bible is all about the evolution of our inner consciousness – not the creation of the outer physical world!

In a nutshell, according to the wordplay, anagrams, homophones, themes, verse and symbology in all Shakespeare’s works, in the beginning, the feminine polarity of the soul, Eve, was ‘raped’ by the Serpent (lost its original innocence) and, with Adam’s subsequent shame, there were three dire consequences: we lost the Holy Grail, we allowed the hybrid, warring issue, (the monstrous birth) to usurp and rule over us and we, the soul, the real king and queen, were banished to the oubliette.

Shakespeare implies that when Jesus came into the darkness-enshrouded world, to fulfil the Old Testament prophesies, he restored the Holy Grail (the song of the soul) and liberated the soul of all mankind from the tyrannical law of Moses.

At the Pentecost, after the ascension, the final action to break Lucifer’s stranglehold, the Grail came upon the disciples as the ‘wind from heaven’, dramatised by Shakespeare as The Tempest – and personified below by Rodin! 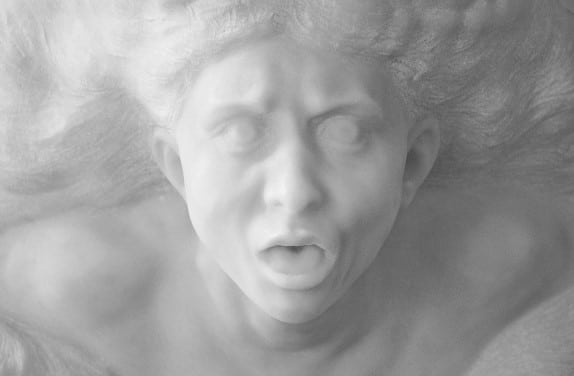 To keep the secret buried, the true meaning of the Grail was shrouded in a complex nexus of symbols and symbols of symbols of symbols. The Tempest was one of Shakespeare’s key dramatisations for the ‘wind from heaven’, the Tree of Life, ‘the Word made flesh’, the sound of all creation, the music of the spheres, the humming of 1000 violins, the buzzing of bees and flies, the breath of life, the rock, the stone, the waters, the bread of heaven, the stone, and on and on and on… 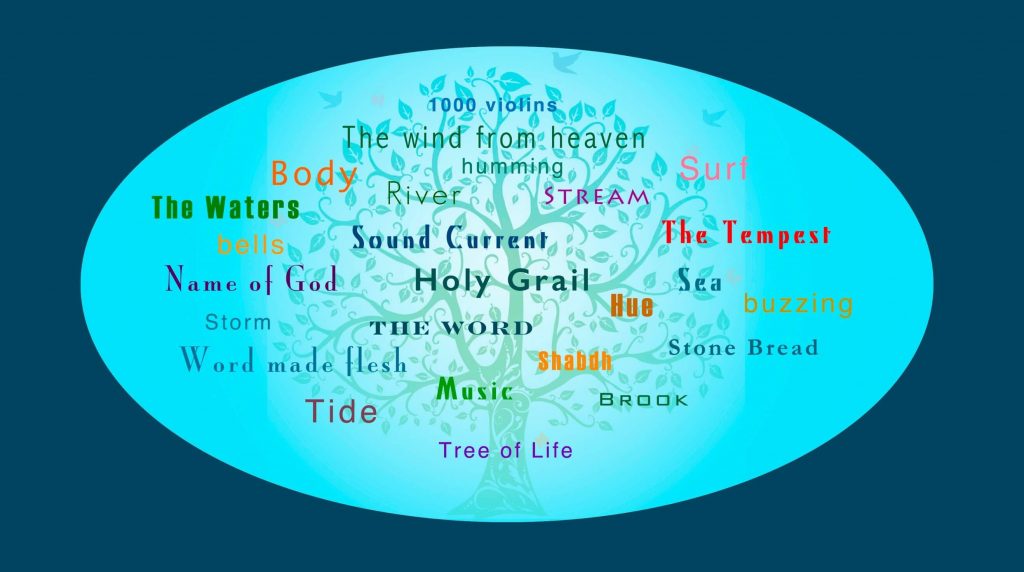 Get thee this, so deliciously obscure:

“Poor harmless fly, that with his pretty buzzing melody, came here to make us merry, and thou hast killed him” – Titus

According to the way Shakespeare seems to interpret scripture, this mystical sound, the voice of God, the song of the soul, was the direct connection between the earthly consciousness and our true divine nature. When this sound in all its manifestations and the energy of the Tree of Life itself was cut off, we as man not only lost awareness of our divinity, but lost the portal to the way home to the kingdom of God, our true home – leaving us condemned to eternal cycles of birth, death, reincarnation, and suffering – hell, in other words – that’s where we all are now folks!

Shakespeare has many characters representing the soul, what it endured and how it was liberated. Lavinia sits in a line of  tragic ‘souls’ that includes, Desdemona, Cordelia, Juliet, and Richard II.

Lavinia endured three sufferings to represent sacrifices of the Christ in his action of liberating mankind.  She was raped (as did Eve lose her innocence) her tongue cut out and her hands cut off. These symbolise the corruption of Eve, the silencing of the song of the soul, and the prophesied piercing of the hands in the crucifixion.

“Here stands the spring whom you have stained with mud…Both her sweet hands, her tongue, and that more dear than hands or tongue, her spotless chastity”- Titus 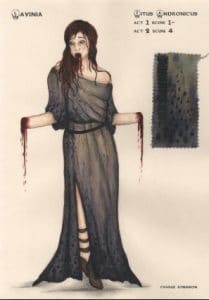 When Lavinia’s ‘voice’ was finally liberated, this indicted the monstrous brothers, Chiron and Demetrius (Cain and Abel) and led to the consumption of the blood and body.

Of course, as in Twelfth Night, (and all the plays) Shakespeare twists, turns, and contorts all the elements of the Eucharist in order to keep them safely out of harm’s way. 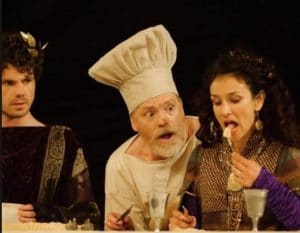 Is this image of Titus dressed in a chef’s habit a parody of the priest in his robes and mitre? Is he lashing out at the ignorance and emptiness of the ritual the Christians hold so sacred, while in Christ’s name they murder, torture, terrorise, and spill the blood of the people with diabolical impunity? Is this what our reformation-impassioned Bard was feeling?

The answers to our questions are rarely far away. Maybe we need look no further than King Lear where, as well itself being an anagram of ‘real king’, the names Shakespeare chooses for the two principal antagonists, Regan and Goneril, are anagrams of anger and religion! And what do these ‘characters’ do to the real king – betray him, and banish him.

Speaking of hidden meanings in names, here’s one to quench your thirst: LA-VIN-IA. Coincidence that the one who’s blood is so poignantly spilled and who is called first to receive the blood in its vessel with the ironic line, ‘come, Lavinia receive the blood’ has the Latin for ‘wine’ embedded in her very name? I doubt it.

The light behind the shadows

But there’s yet another way of seeing the Bard’s motives. Underneath all our anger is caring. Although often misguided or destructive, we don’t get angry about things we care nothing for. Why would anyone with the insight, love and compassion of Shakespeare mock what’s sacred just for the sake of it? Perhaps he’s at once honouring the truth inherent in the Eucharist, but goading us to look for the light behind the shadows. Entreating us to understand the richness and possibility lying in the shadows of our own Self.

If we eat merely the symbols of ‘holy communion’ it leaves us empty and cheated. But if we taste the essence of its meaning: the reunion of the Sound with the Light of our True Self, the renewed access to the Tree of Life we can transcend the suffering, get free of the never-ending dilemma of pain and bloodshed, and live a life of purpose, passion, and profit for all.

The last chapter of Revelation promises “Blessed are they that do his commandments, that they may have right to the tree of life.” And what are ‘his’ commandments? Simply: to love ourselves and each other. Yeah, simple to say – so hard to do!

No coincidence then that when, in the finale of Titus, the bodies are buried and the blood mopped up, the new ruler of tyranny-liberated Rome is none other than…Lucius (meaning light).