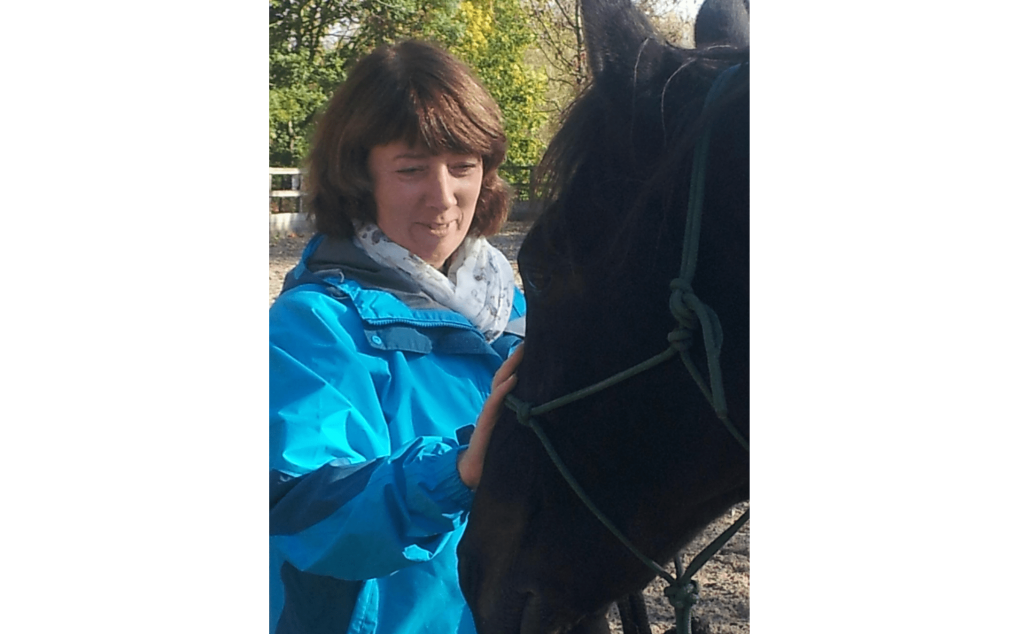 ‘I don’t think I really came into the equation. I’d got so used to putting everyone else before me I’d lost touch with what I wanted’.

‘Can you feel the gratitude I feel towards you? don’t you see what a difference you have made? Can you imagine what probably would have become of me without you? It truly has been a momentous experience. Thank you. it has been inspirational.’ – Caroline Peters

Caroline came to me as a personal (non-corporate) client. She’d sat next to a guy on a plane who was still raving about his day with me and the horses. She knew she needed to experience the magic for herself.

She is an intelligent, talented English woman, married for over 20 years to a German, with whom they had one 17 year-old daughter. They were all living in Germany. She flew over for a day – ostensibly to ‘restore her self-confidence’. She wanted to go full-time as a translator and felt worried about handling it all after having been a home-based mum for 17 years. Fair enough.

I’m now sitting here leafing through the 9-page, hand-written letter of gratitude she sent me after 6 months of intensive coaching on Skype.

(N.B. that ‘divorce my husband’ was in no way the stated reason for the session.)

‘Paul, you are the first person I can remember who has spent time with me, wanting something for me. You were very present, but not opposite me like most people. You were next to me. Sometimes it felt you were me, only a few steps further ahead in understanding. You let me be me and I hadn’t been just me in years. I’d always played a role, always doing what was expected of me. I could not imagine it was ok to stand my own ground with Serendipity. I felt great joy and I hope she enjoyed it as much as I did. I don’t want ‘authority’, I want ‘gegenseitigentet’, ‘reciprocation’.

The first hour or so of the ‘horsejoy’ day is about looking at how to transform ‘deep existential fears into positive outcomes’ in a key relationship. In particular how we generate ‘perfect reasons’ for settling for a quality of happiness way below what we deserve and what is possible.

When I feel the client is clear on these vital parameters, I design an exercise with one of my horses that acts as a metaphor for working through the real blocks relationship. The outcome of a session is profound existential learning. You learn ‘who you really are’ and how to choose to be your true self continuously. You also learn to recognise ‘who you are really not’ so you can empower yourself when your ‘false self’ undermines you. These two key reference points open the way to the ongoing, advanced work.

I asked Caroline with whom did she have a key relationship that she would most like to influence more effectively. What she said seemed incongruent with her body language. She hesitated…her breathing rate went up a tad, her eyes went a little pink and darted to-and-fro. She chose the guy she was doing part-time work for – it hardly seemed like a momentous relationship. I could have challenged her right then. , but my motto is ‘let the horse do it’. So I let it go and waited for my ‘co-facilitator’ to do it more effectively.

This being Serendipity, my gorgeous, 16hh 2”, dark bay, thoroughbred mare.

When a horse has a free choice about whether or not to follow your directions, they will only do so if they respect you as an authentic leader. They will ‘test’ the clarity of your intention and congruence of your energy – if they can ‘lead you around’ then you are left holding a limp rope and the familiar feeling you get in the chosen key relationship.

This feeling showed up for Gillian almost immediately. Her word was ‘helpless’. I asked her who it reminded her of being with and she said sheepishly, ‘Stephan, my husband!’.

Her outcome soon morphed into an emotional desire to ‘save my marriage’. But no matter how much she tried to sell this idea to Serendipity, she was not buying it. This told me Caroline did not really want it in her heart. It turned out she was hanging on for several key reasons: she felt ‘the promise I’d made when I married him was really important. Keeping it (no matter what) was a virtue’. She also felt that ‘there was too much to lose’ if she split up. Number one concern was the impact on Greta, her 17-year-old daughter who idolised her father.

The sobering reality was, based on his behaviour, Stephan had already divorced her – a long time ago! As soon as she announced her pregnancy, he had become a virtually absent father.

‘I couldn’t for the life of me see why Stephan constantly wanted to be away from us. He had a reputation for going on more (often unnecessary) business trips than anyone else. There are people around me who don’t even know I’m married or that I live with Greta’s father.’

The other reality was that Serendipity would not engage with her until she really stood her ground and put her intentions first. Inside her this meant putting her own happiness, well-being, and fulfilment ahead of taking responsibility for everyone else’s happiness. Only when she authentically claimed her personal leadership strength would Serendipity take any notice. As she took this risk and expanded her ‘comfort zone’, the horse entered into a willing, enthusiastic partnership. She was not a horsewoman, but by the end of the day she was experiencing something even lifelong horse-owners never do.

The question remained: from this newfound place of strength and clarity, could she still rebuild her marriage and family? We began a series of regular Skype coaching sessions.

As they progressed, understandable feelings erupted of betrayal, anger, resentment, and regret at having ‘wasted’ twenty years of her life with a man who did not reciprocate her love. She was livid (and you know what they say about a ‘woman spurned’).

We were in danger of sliding down the helter-skelter to hell. A bitter, acrimonious, lose-lose, revenge-laden divorce with a devastated Greta was looming. I suggested that if she went this way, she really was going to be a victim – big time. Would she be up for transforming the whole scenario into a win-win-win for all three of them?

Over the ensuing 6 months, this remarkably brave, evolved, woman took continuous risks in taking responsibility (not blame) for having ‘allowed’ this situation to fester for 17 years. She worked on forgiving herself and her husband. She risked difficult, direct, honest, open communications with Greta and gave up trying to protect her from the truth.  She supported Greta in looking at and dealing in a mature way with this reality of life.

But the biggest ‘healer’ was in reframing the regret of what she felt she lost, into gratitude for what she really had gained.

‘If I hadn’t worked with you, I would have ended up bitter and twisted. You said ‘tell me what you’re grateful to Stephan for’! I thought it was an impossible task. But it wasn’t. there is so much I’m grateful for and doing the exercise completely changed my perspective. I’m letting go my marriage with a feeling of love and gratitude. I don’t want to be married to him anymore but I do care for his happiness. I want him to be happy again. I want to feel happy again (and I do!).’

Last time we spoke she’d got everything she wanted for herself, Stephan and Greta. And, as a bonus, was several months in to a new relationship with a man that really did promise to be ‘the one’!

All relationships end. Life is like that. But it doesn’t need to be the end of your happiness – it really can be the beginning of something new and enriching.

You can have a happy ending and a new beginning with any key relationship. You can have this now.